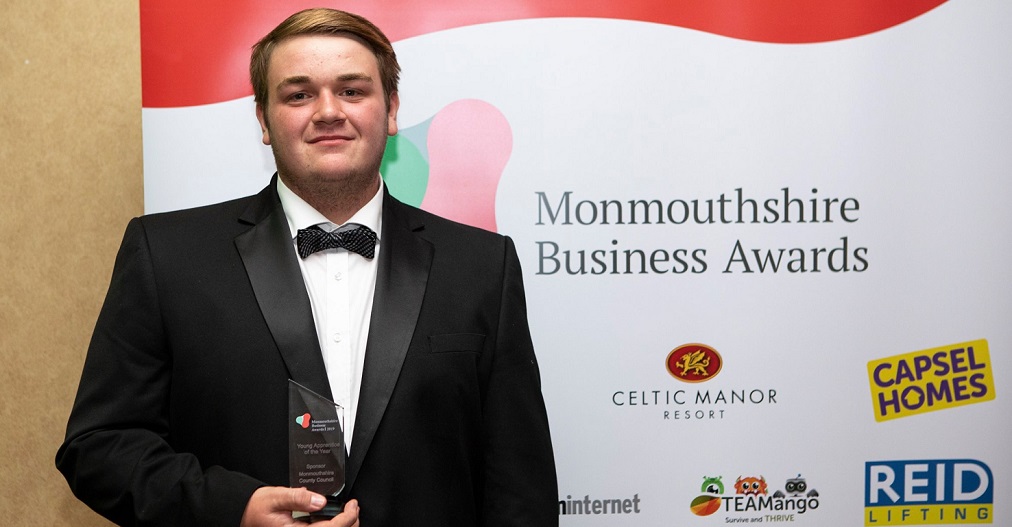 Last Friday (4 October) Danny Hodges, a bricklaying apprentice from Caldicot, was named Young Apprentice of the Year at the prestigious Monmouthshire Business Awards, held at the Celtic Manor Resort.

The Young Apprentice of the Year award, sponsored by Monmouthshire County Council. recognises an individual’s commitment to their personal development and the outstanding contribution they have made to their workplace.

Danny, a bricklaying apprentice from Caldicot, has been with Y Prentis since October 2018. He is about to complete his Level 2 Diploma and NVQ in Brickwork at Coleg Gwent before moving on to study towards his Level 3. Since being with the scheme, Danny has fully embraced the shared-apprenticeship model. He has worked with contractors such as CJ Construction, Morgan Sindall and Jehu Group and has learnt a range of techniques that he has developed throughout his apprenticeship. He is currently working on Candleston Homes housing development in Abergavenny.

Danny says, “The Monmouthshire Business Awards were great! It was nice to be surrounded by familiar faces and have a catch up with people such as Craig from CJ Construction who I started working with on my very first placement. Winning the award feels like a personal achievement for me and it’s great to be rewarded for the hard work I’ve put into my apprenticeship.”

The Monmouthshire Business Awards celebrates business excellence throughout Monmouthshire and provides a prestigious platform for local businesses and individuals to shine.

Adrian Huckin, Director of Y Prentis, says, “I am extremely proud of Danny Hodges for picking up the award of Young Apprentice of the Year award. Danny has been an outstanding apprentice and is totally focused on developing his craft as a bricklayer while continuing to learn. What has been particularly pleasing is Danny`s commitment to supporting the shared apprenticeship scheme by promoting apprenticeships to the next generation of young people. He can be proud of his achievements and has a bright future in front of him.”

Watch the short film below which features Danny and promotes apprenticeships in construction to the next generation.